That’s all folks. Thanks for following, we will have all the reaction by 8am online and of course on all our social media channels.

3.24am – And that’s that folks. Worcester is once again in No Overall Control.

Labour are on the board, one defence one hold. Coun Zoe Cookson is the new councillor for Rainbow Hill

2.24am – Another chapter of the Green Party story is written as they take St Peter’s

2.16am – Rumours of demise greatly exagerrated? Another vulnerable seat, another Tory hold as Coun Mohammed Altaf returns to the Guildhall.

2.14am – Massive boost for the Tories that Worcester’s Mayor holds his seat

1.59am – Just a reminder against this backdrop of the Conservative leader Coun Marc Bayliss going home and Tory sources briefing gloomy news. They are defending 7 of their 18 seats they had before James Carver quit….

1.55am – Warm embrace between Raffi Ali and Labour’s Coun Jabba Riaz. A sign a result could be close in Cathedral?

1.46am – It’s fair to say there’s some disagreement on any reason for Tories potential losses. Either Partygate or the cost of living. So tweet me @RGObserver – if you didn’t vote Tory but usually would, what put you off?

1.14am – Leader of Worcester City Council Coun Marc Bayliss has left the building as another Tory source tells the Observer ‘we’ve had a good kicking’

12.43am – A mood of quiet confidence appears to be among Labour at the moment. In contrast several glum Conservative faces…

12.28am – Interesting insight from a Green Party source pointing to possible joy in Gorse Hill and even St Peter’s…of course these are only rumours at this stage 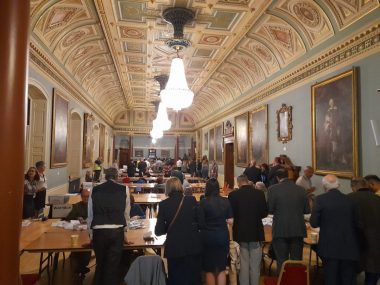 11.44pm – We are halfway through the verification with counting expected to start at around 1am. Turnout is thought to be low though…

For me its St Peter’s Parish, Gorse Hill and of course Bedwardine….

11.21pm – Let’s try again! Some facts and figures before we get rolling

Conservatives were on 18 seats until the resignation of James Carver in February which put the council into No Overall Control. But will it stay that way?

GOOD Evening and welcome to the Guildhall, polls closed some 40 minutes ago and ballot boxes have already arrived here.

We’re here throughout the night as Worcester decides the make up of the City Council for the next 12 months.

I’d love to hear from you and your thoughts, tweet me @RGObserver and I’ll do my best to feature you and respond as the night goes on!

Advertise on the Worcester Observer to boost your online presence.

Search for properties in Worcestershire, Warwickshire and the West Midlands.