GREEN Party national co-leader Carla Denyer became the first of the main party leaders to visit Worcester as she hit the campaign trail with local members.

During a packed visit to the city on Wednesday (April 6), Ms Denyer visited Worcester Foodbank before joining candidates for the May 5 poll in which the party will seek to continue its successes at the ballot box.

Worcester’s Green Party has seen a surge in support in the last decade with the party now boasting four city councillors while Coun Matt Jenkins is one of three Green Party members on Worcestershire County Council.

After arriving by train to the latest campaign stop, Ms Denyer accompanied party members to the city’s foodbank in Lowesmoor to speak to volunteers and users.

She heard first-hand about the impact of the cost-of-living crisis and the rising demand being tackled by staff at the vital lifeline.

Referrals to foodbank have climbed to record levels in recent months and during February Worcester Foodbank volunteers fed 876 people – up nearly 10 per cent on the same month last year.

Speaking after her visit, she said: “It’s worrying the foodbank is getting many people who have never used a foodbank before and lots of families are struggling to put food on the table even those with full time jobs.”

“We really need to increase the minimum wage to allow for the large inflation rises we are seeing in both food and energy costs.” 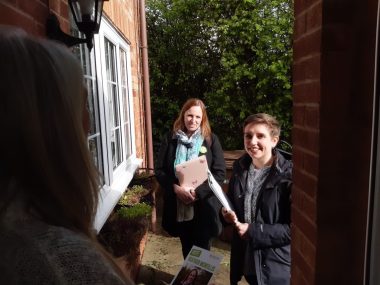 The Green Party chief was then whisked by electric bike to Gorse Hill with candidate Heather McNellis to hit the doorsteps in a bid to win votes.

A whirlwind afternoon came to a close with a visit to St Peter’s where Ms Denyer and candidate Dr Steve Cockeram made their bid to win support from local residents.

Advertise on the Worcester Observer to boost your online presence.

Book your newspaper advert with our online advert creation tool.