CITY councillors will meet next week to approve the final two schemes to be launched with the £19.6million investment into Worcester from the Government’s Towns Fund.

A total of five projects will be funded, following the City Council’s successful bid to the national scheme.

Business cases have already been approved for the first three and, if the Policy and Resources Committee gives the nod to the final two, it will lead to the Government releasing the final near-£12 million from the funding allocation.

When it meets on Tuesday (May 24) the committee will be asked to support the use of £10million for the redevelopment of a key location within the Shrub Hill Quarter.

If the scheme is approved, Isaac Maddox House in Shrub Hill Road, a former NHS office, will be renovated and developed into an enterprise centre for business use.

This will be the first phase of the development of this canal-side site, which will also see new housing in an attractive environment. A new walking and cycling route would also be created to run from Shrub Hill Road to St Martin’s Quarter, past the new development.

This new development would sit alongside a broader private sector redevelopment of the city’s Shrub Hill quarter.

The other Towns Fund business case – to be considered at the same meeting – is on the theme of community skills and enterprise. The aim is to provide training to residents within their local areas, particularly those in deprived communities without mainstream qualifications. This will range from courses in basic literacy and IT to training in customer services and construction trades including bricklaying, carpentry, plumbing and green tech trades such as solar and heat pump installation engineers.

If backed by the committee, this business case would see £1.96million from the Towns Fund used for: 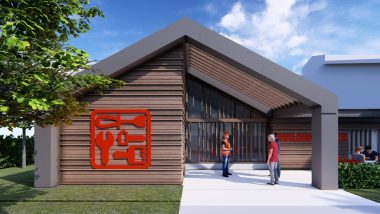 An artist’s impression of what the “Building Block 2” at Dines Green could look like.

Reconfiguration and extension of the Community Centre at Ronkswood

A contribution to a Worcestershire County Council project at the Fairfield Centre in Warndon, which will expand its capacity to deliver hair and beauty skills training

One-to-one consultation spaces at the Tolly Hub in Rowan Ave and the KGV Hub in Brickfields.

The other Worcester Towns Fund projects for which businesses cases have already been approved and for which investment cash has already been released are; a £2.5million contribution to the new Severn Centre for Health and Wellbeing currently being built in Hylton Road; a £4.5 million investment in active travel, including new off-road walking and cycling routs and a contribution to the new Kepax Bridge that will create a new river crossing at Gheluvelt Park; and £640,000 for a heritage and riverside project that will boost Worcester’s tourism business.

Book your newspaper advert with our online advert creation tool.