A BRONZE statue paying tribute to the men who served in the Worcestershire Regiment and the contributions they made in the First World War and Second World War has been unveiled in the village of Norton.

‘The Sentry’ memorial sculpture, which stands at almost two metres high, has been unveiled near the old Barracks by the Worcestershire Regiment Project Group and complements the existing information boards, commemorative garden, road signs and a community website.

It was designed by sculptor John McKenna and is inspired by a small, sculpture created by William Sargent Jagger (1885-1934) which depicts a soldier of the Worcestershire Regiment. 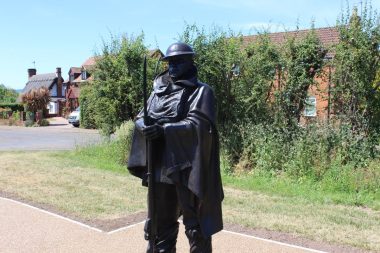 The new statue, which was five years in the making, is situated on a raised grass verge on Crookbarrow Road between the Barracks and St Peters Garden Centre in Norton.

Dennis Hodgkins from Norton Worcestershire Regiment Group said: “We want this project to give everyone who resides, visits or engages with Norton in the future to have access to a relevant and meaningful memorial, which reflects the history of our area, its community and the significance of the Barracks over the ages.

“It won’t be long before there are no living survivors of these wars and it is of upmost importance we recognise, educate and celebrate their commitment.

Mr McKenna studied at Worcester College of Technology and on his first day at art college, he and his fellow students were sent to Worcester Art Gallery and Museum to find something to draw.

He picked a maquette of ‘an ordinary solider of the Worcestershire Regiment’ by the First World War Gallipoli survivor Charles Sergeant Jagger, whose prolific work includes the Royal Artillery Memorial at Hyde Park Corner and the memorial at Paddington.

Thirty five years on, the Worcestershire Regiment Project Group asked him to produce a life-size statue version from the very same model.

The Norton Worcestershire Regiment Group was founded in 2015 by a number of interested local people who came together with the sole aim of highlighting the significance that the area has played over many years.

Over the years the group has developed a variety of events which commemorate the Worcestershire Regiment including the creation of a local Commemorative Garden, the establishment of five Information Boards around the village, an accompanying trail leaflet and the installation of ‘Welcome to Norton’ Road Signs which reference the Worcestershire Regiment, plus setting up a website detailing historical facts and information.