SINGERS from the Worcester Festival Choral Society will take part in the Three Choirs Festival which starts tomorrow and runs until next Saturday, August 1.

The society will be celebrating its 160th anniversary season this September when it reconvenes to make music again after a gap of 18 months.

The Three Choirs Festival, which has rotated annually between the Cathedral cities of Worcester, Hereford and Gloucester since 1715, was due to return to Worcester last summer but postponed due to the pandemic.

Now it is going ahead – including the large-scale choral singing for which the Festival is famous – in line with the latest government guidelines on massed events.

As a result, more than 40 members of Worcester Festival Choral Society will be performing in three, major evening concerts in Worcester Cathedral as part of the Three Choirs Festival chorus, alongside the renowned Philharmonia Orchestra.

The 150 members of Worcester Festival Choral Society are also looking forward to starting rehearsals for its upcoming 160th season.

The planned concerts – all taking place in Worcester Cathedral under the baton of Director of Music Samuel Hudson – include Mozart’s Solemn Vespers and Fauré’s Requiem on November 27, Handel’s Messiah on December 11 and Bach’s St John Passion on March 19, 2022. 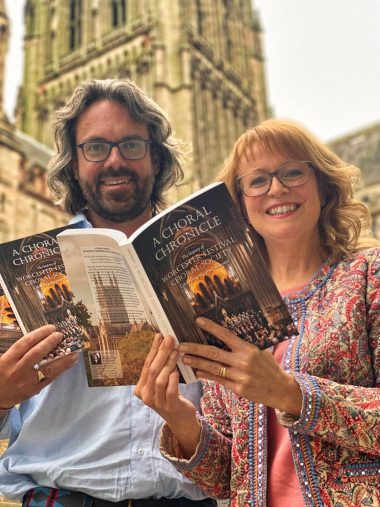 To mark the anniversary milestone, a new, full colour book has also been published about the Society’s impressive musical heritage.

A Choral Chronicle – The History of Worcester Festival Choral Society charts the WFCS story from its Victorian origins to the present day, via two World Wars, 11 conductors, hundreds of accomplished concerts and many famous names – including Sir Edward Elgar, who premiered two of his works with the Society and was closely involved as a conductor and musician.

Ben Cooper, Worcester Festival Choral Society chairman and chair of the Three Choirs Festival’s Worcester city committee, said:: “For more than a year it has been impossible for large choirs like ours to meet, rehearse or perform, so it’s incredibly rewarding to be able to bring outstanding choral music back to our City for local audiences to enjoy.

“The Three Choirs Festival and Worcester Festival Choral Society have earned long-standing reputations as shining lights in the choral music world, and we are both proud and excited to be continuing that heritage.”

The new WFCS book costs £25 with all profits going to the charity’s funds, and is available from www.wfcs.online, Waterstones in Worcester, the Worcester Cathedral gift shop and Worcester Tourist Information Centre.

Walker’s joy at being handed schools role in reshuffle

Life-saving messaging to be rolled out across the UK